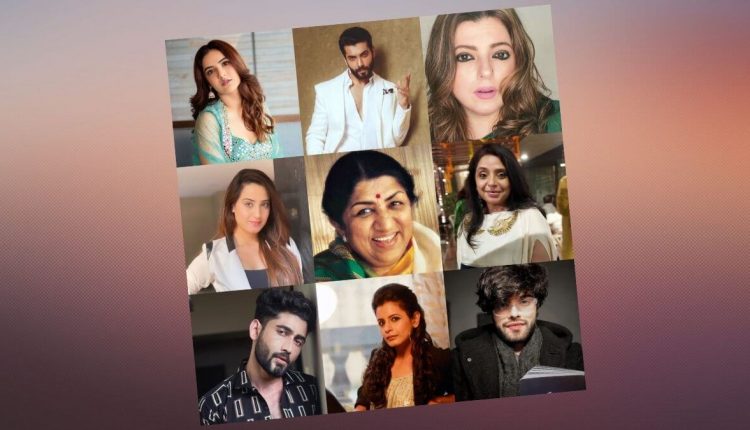 Lata Mangeshkar’s demise means end of an era. Her voice, songs, demeanour and smile ruled the world. There can be no one like her. The government had announced two-day national mourning in memory of the legendary singer. The never-ending list of melodious songs will stay on; she will live within us all forever. Celebrities talk about their love for her, how much they are going to miss her. They also share their favourite song of the Nightingale of India, how much they relate to it:

Jasmin Bhasin:Lataji is called the nightingale for her melodious voice. She will live in our minds and hearts through her songs. I like “Mere Pyar Ki Umar Ho Itni Sanam” from film Waaris.

Delnaaz Irani: It’s a very big loss. We have grown up listening to her songs and Lata Ji was indeed the Nightingale. She was a singing queen. It is an unparalleled loss to the music industry and to the world of music. I loved all her songs but ‘Lag jaa galey’ was my most favourite song. Also, ‘Aye mere watan ke logon’ is by far the best Lata Mangeshkar song ever and every time I listen to the song, it brings tears to my eyes.

Sharad Malhotra: Lata Ji’s list of melodious and heart-warming tracks are never ending but my most favourite are ‘Ajeeb Dasataan hain ye’ and ‘Do Pal Ruka khwabon ka kaarwa’, such soul-stirring and goose-bumpish kind of vocals and the melody always leaving me wanting for more. A voice that will live through generations to come and though I never got the opportunity to meet Lata Ji, but I feel so blessed to have grown up listening to her iconic tracks.

Aalisha Panwar: It is shocking news as we lost one of our legends. She was not just a singer but actually a national treasure. The list of her songs is never-ending, which are so soulful. Her voice was something else, it was not ordinary. I grew up listening to her songs. Her songs are also the reason why I fell in love with music. She has such a melodious voice and now we won’t be able to listen to her any new songs but she will always be in our memories. My most favourite one is ‘Lag jaa galey’. May her soul rest in peace and all my condolences to her family.

Vaishalee Thakkar: Certain losses are immeasurable. We are lucky that we are born in the same country as Lata Mangeshkar. The Music world will mourn this loss forever. My favourite song is ‘Mairi mein kase kahoon preet’ and the composition is by Madan Mohan.

Ranaksh Rana: My favourite one of all of her gems is ‘Aye mere watan ke logon, zara aankh me bhar lo paani’ because that’s one song which managed to bring out the deep patriotic emotions in us as kids. On all Independence Days and Republic Days in school, this song would unite us wherever we are, and that has stayed woven inside us.

Aditya Nair: When I learnt the devastating news of the demise of the legendary singer Lata Mangeshkar Ji, I felt anguished. She was more like a celestial being to me who will be there till the end of time. I have never even thought this day would come, never imagined it could happen. Since my childhood, I have grown up listening to her songs and she has become an integral part of my life. She has spread love for more than seven decades, her list of songs are never-ending. She has always been special to me, her songs have always helped me during my darkest times. My favourite is ‘Aye mere watan ke logo’

Da Makeup Lab elated at the super success of Ranveer…

Should YRF’s claim of 313 crore gross worldwide for…